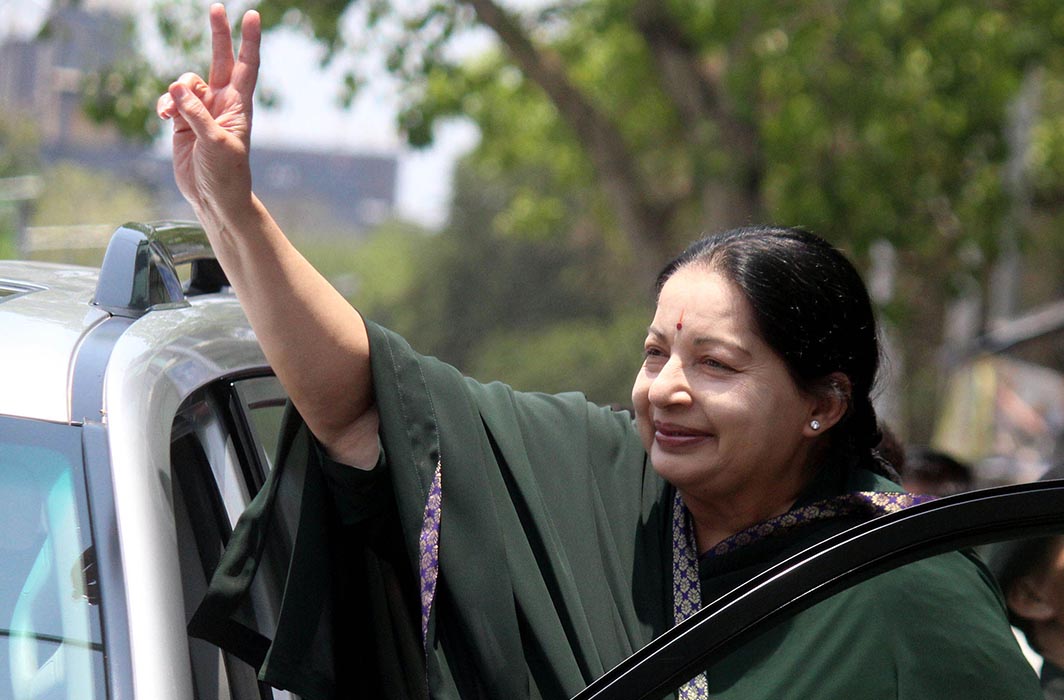 The legal battles of Tamil Nadu’s late leader have been legendary and long. While she won and lost cases stupendously over the last 23 years, some will continue even after her demise

Jayalalithaa is no more. With her death, Tamil Nadu had lost one of its most charismatic leaders. The 68-year-old leader will be remembered for many things, especially her freebies, be they laptops, bicycles for girl students, mixies, grinders and ceiling fans, or her Amma canteens and Amma pharmacies. She will be remembered for filing the most number of defamation cases against her political opponents and media-persons. But more than anything else, Jayalalithaa will be remembered for her constant battle with the judiciary for the past 23 years or more.

Her legal battles started in 1993 and did not end till her death. The Supreme Court is yet to pronounce its judgment in the much famous disproportionate assets (DA) case. There were four accused in this case— Jayalalithaa, her close confidante Sasikala, VN Sudhakaran (Jayalalithaa’s foster son) and Sasikala’s brother’s wife, Illavarasi.

Jayalalithaa was charged with amassing wealth to the tune of Rs 66 crore during her first tenure in 1991-1996. She and the other three were convicted for four years by a special court in Bangalore on September 27, 2014, in this case. However, the Karnataka High Court acquitted all of them on May 11, 2015, thanks to some glaring mathematical errors. The Karnataka government appealed against this judgment. Incidentally, the case was dealt by the Directorate of Vigilance and Anti-Corruption of Tamil Nadu, but shifted to Bangalore in 2004 on a petition filed by the DMK. A division bench of the Supreme Court headed by Justices Pinaki Chandra Ghose and Amitava Roy reserved its order on June 7 this year.

Jayalalithaa has the dubious distinction of losing power twice while being chief minister. The first time was in 2001 while the second was in 2014.

Though her legal battles started in 1993, they picked up momentum from December 1996. Though Jayalalithaa had captured power with a brute majority of 160 MLAs in the 234-state assembly, she was routed in the 1996 elections, thanks to allegations of corruption.

The DMK, which came to power in the 1996 elections, constituted three special courts to try corruption cases against Jayalalithaa and her erstwhile council of ministers. Forty-one cases were filed, with Jayalalithaa herself facing 12 cases. But she won 11 cases in whichever court they came up in.

In fact, Jayalalithaa has the dubious distinction of losing power twice while being chief minister. The first was in 2001. Jayalalithaa was convicted in two corruption cases by a trial court in February 2001 and hence, not allowed to contest the 2001 assembly elections. She filed nomination papers from four constituencies and all four were rejected.

However, her party, the AIADMK, won a landslide victory and on May 14, 2001, Jayalalithaa became CM. This was challenged by the DMK in the Supreme Court and a five-judge Constitution bench headed by Chief Justice SP Bharucha quashed her appointment as chief minister. The bench ruled that a person who cannot contest and be an MLA, can’t hold the chief minister’s post. She, however, won her appeal in the Madras High Court and bounced back as CM in March 2002.

The second unseating was on September 27, 2014.  A special court in Bangalore convicted Jayalalithaa in the DA case to four years simple imprisonment and imposed a fine of Rs 100 crore on her. She was sent to jail immediately. Again, she bounced back after registering a stunning victory in her appeal in the Karnataka High Court. Justice CR Kumaraswamy gave a new lease of life to Jayalalithaa and three others. But the case will be remembered for its controversial judgment and errors.

The protracted legal battles would have cost several crores for Jayalalithaa if one goes by the sheer volume of cases she fought in the last 23 years.

She was also the first chief minister against whom the governor granted sanction for prosecution while in office in a corruption case. This was on March 25, 1995, when then governor M Chenna Reddy granted sanction on a private complaint/petition filed by then Janata Party president Dr Subramanian Swamy to prosecute her. 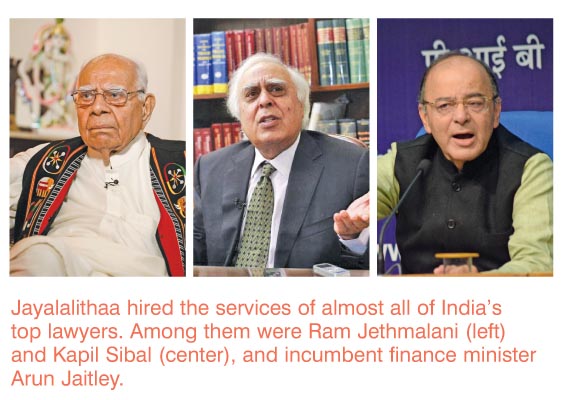 This was challenged by Jayalalithaa in the Madras High Court, but a division bench headed by Justice M Srinivasan dismissed her petition and upheld the governor’s sanction. However, Jayalalithaa got a stay in the Supreme Court in May 1995 and the matter was referred to a Constitution bench where it is still pending. One of the important questions raised by the division bench while referring the matter to the Constitution bench was whether a governor could grant a sanction like this on a private petition without the aid and advice of the council of ministers.

The protracted legal battles would have cost several crores for Jayalalithaa if one goes by the sheer volume of cases she fought in the last 23 years. But she hired the services of almost all the top lawyers of the country to argue her cases. Four former Union ministers—Ram Jethmalani, Kapil Sibal, Arun Jaitley and Ravi Shankar Prasad—appeared for her.

Other legal eagles included KK Venugopal (he probably represented her the most), K Parasaran, Fali S Nariman, Rajeev Dhawan, Mukul Rohatgi, Harish Salve, G Ramasami (former Attorney General) and Siddhartha Shankar Ray. In fact, Ray appeared for Jayalalithaa at a magistrate court in Bhuvangiri, a taluk in Cuddalore district, in April 2001. The magistrate was also the returning officer of that constituency. As she was convicted in two corruption cases, her nomination papers were rejected by the returning officers. Anticipating this, Jayalalithaa brought in Siddhartha Shankar Ray, who travelled over bumpy roads to reach the Bhuvanagiri magistrate’s court. However, he lost the case as the magistrate refused to buy his arguments and dismissed the nomination papers.

Just the fees paid to the battery of lawyers would be an interesting topic for any researcher. Even by a conservative estimate, it would cross several crores. Rajeev Dhawan, who appeared for Jayalalithaa at the special courts constituted by the DMK government in 1997, frankly speaks about this in his column to a British newspaper immediately after Justice Kumaraswami acquitted Jayalalithaa in the DA case in May 2015: “If you want to be in the litigation business, you have to be rich. Law is cheap. Lawyers are expensive. For all its majesty, the law is for the wealthy.”

Meanwhile, if judgment in the DA case implicates Sasikala, it will have huge ramifications not just for the AIADMK and Tamil Nadu politics, but for center-state relations.

The Sword of Damocles does indeed hang over the state.

Lead picture: Jayalalithaa was the first chief minister against whom the governor granted sanction for prosecution while in office in a corruption case. Photo: UNI

McDonald’s Case: Chew on This